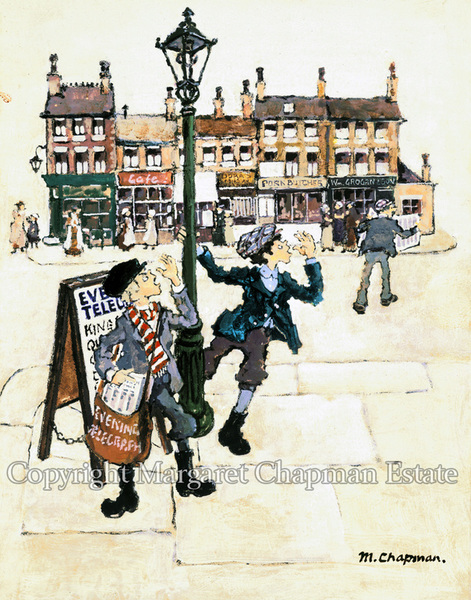 Paperboys
Margaret Chapman was born in Darwen, Lancashire in 1940.

She became interested in painting at an early age and studied at Liverpool College of Art 1958-62 at the same time as Stuart Sutcliffe and John Lennon.

She had a small exhibition of her paintings at Darwen Library in the early 1970s and it was here that her work drew the attention of a Manchester art dealer.

Soon after she was selling throughout the north of England and London, then elsewhere.

She managed to combine the demands of being a successful artist while having four children.

Her works have now sold in more than 50 countries around the world.

She was sometimes thought of as being the same age as L.S. Lowry despite being more than fifty years younger.

Margaret’s interest in the Edwardian period which forms most of her work was borne out of a fascination that period had for her rather than first hand memories of it.

She was meticulous in her research of the Edwardian era and made sure the dress, settings and spirit of her paintings’ characters was always accurate.

It is interesting to note her original paintings were selling for the same as Lowry's in the mid 1970s.

In 1978 she published a book 'When Steak Was a Shilling a Pound' which is a collection of her best-known works with Margaret’s own prose alongside.

Margaret is still a member of The Fine Art Guild.
Copyright © 2002-2016 Chapmanestates All rights reserved.
Powered by